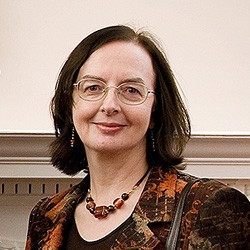 Her research interests and publications have focused primarily on the history, experience and significance of pilgrimage from the earliest centuries to the present day and the interaction of Christian belief and practice with Western culture, especially literature and art.  She has edited four major interactive resources which explore the history, material culture and influence of Christianity, particularly in England, and is a series editor of the Boydell and Brewer ‘Christianity and Culture’ series, and of the ‘Routledge Studies in Pilgrimage, Religious Travel and Tourism’.  Dee is currently writing a monograph on 'The Dynamics of Pilgrimage' and co-editing a volume on 'Pilgrimage and England's Cathedrals.'

Dee recently led a large 3-year Arts and Humanities Research Council funded project on ‘Pilgrimage and England’s Cathedrals, past and present.’ She has since received AHRC follow on-funding for a project working with partners in Canterbury and London to use the 2020 Thomas Becket anniversary as a catalyst to enhance heritage, tourism, and community engagement. Dee also oversees Christianity and Culture’s wide-ranging programme of research-based heritage interpretation partnerships with cathedrals, churches and other institutions.